Happy Fourth of July to all!

I really was planning to do something special today–more smoked lamb and goat shanks–but I admit to turning to a total wuss, wimping out…as I looked at the weather forecast for the week.  Even though those are easy, it still requires some minding of the grill, and I just could not face it.  I resolved to have a quiet, cool Fourth of July–just me and the cat–indoors with the air conditioning…and I woke up this morning wishing I’d not been such a wuss.

Saved by friends!  An impromptu invitation to join them for grilled chicken this evening.  So–I’m having my quiet Fourth, but with friends and neighbors. 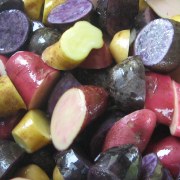 Not to go empty-handed, I am making some patriotic roasted potatoes–red, white, and blue–Red Thumb, Russian Banana (okay, bit of fudging here), and Purple Majesty potatoes (new ones from the farm).  Since it’s HOT (my thermometer is reading 98°F now), I’ve decided that those roasted potatoes are going to turn into something that can be eaten at “room temperature”, that will be light and refreshing, and compliment the chicken.

I’m taking  newly dug tri-colored potatoes and scrubbing their delicate skins carefully, cutting as needed to have them equal sizes so that they cook at the same rate, tossing them with a little olive oil; then into a preheated pan and into a 350° F oven until they are tender.

I’ve done what America’s Test Kitchen recommends and placed cut sides in contact with the baking sheet so that at least some of the potatoes will brown to give roasted flavor. Now for some complimentary and contrasting flavors to finish these. Since all these do taste a bit different, and for me one of the fun things about this is to be able to taste the individual potatoes and to compare them–think about comparing wines–I want light seasoning–nothing to overwhelm the potatoes themselves. The only seasoning at this point is kosher salt.

Since it’s hot outside (my thermometer is now reading 99.7°F ), I’m thinking light and cool flavors.  I don’t want “potato salad”–so vinegar is out, but I do need something “bright”–and light, and something cool.  Time to check out the herbs on the deck, and the crisper drawer.

Chicken makes me think tarragon.  Cool makes me thing mint–hmm.  Let me smush a couple of leaves together and see how that smells.  Tarragon–warm, mint–cool.  Need some brightness to set off the earthiness of the potatoes–lemon zest, and maybe just a bit of lemon juice over the potatoes while they are still warm.  Seems a good start–but not quite there yet.  Needs a little “spice”–some very finely minced red chili pepper might just do it.

After the potatoes had been in the oven for 30 minutes, I used the tip of a paring knife to check doneness–not quite; and, not quite brown enough.  (I probably should have used the heavier half-pan baking sheet instead of this one–drat.) I kicked the oven temperature to 450°F for another 15 minutes and checked again.  Perfect!  Brown potatoes–so out of the oven, ready for the first seasoning.

While still hot, I tossed them with the zest of one lemon and most of the juice of the lemon–nice bright flavor to contrast with the brown and earthy potatoes.  After cooling a bit, I tossed in about a tablespoon each pretty finely chopped French tarragon and mint. That got the first taste of cool mint, followed by the warm flavor of French tarragon.  So far so good.

I let them stand for a bit and tasted again–the lemon flavor is there but not overwhelming–the juice has added just a bit of tartness, but not enough to taste like a “potato salad”. Now, I’m debating chives and chili pepper.  I taste the chili pepper–it’s not screaming hot–and I think that just an occasional bit of heat as you eat the potatoes would be nice.  I seeded and removed the ribs, and finely minced about 1/5 of the pepper and tossed that with the potatoes. (Still debating about the chives–I really don’t want them to taste like ersatz baked potatoes.)

After standing for a bit longer, I tasted again, and decided that chives are not what is needed here–I probably should just leave them alone!

So the final seasonings are the zest of one lemon, lemon juice, mint, tarragon, and just a touch of  red Serrano chili pepper, and a very light sprinkle of a good fruity, extra-virgin olive oil.  I hope that after standing a bit more (not to be refrigerated before we eat the at ambient temperature–or maybe a little less–thermometer now at 100.6°F ) there will be flavors of warm and cool herbs, the brightness of lemon (juice and zest), and an occasional burst of heat from the chili pepper.

Using the baking sheet so that the potatoes are spread out and don’t steam, and preheated does really help get browned roasted potatoes.  If they are too crowded, they will only “steam” and not brown–not really roasted.  The browning is, after all, the whole purpose of turning on the oven!

It’s not smoked lamb shanks, but it’s going to be a pleasant evening with friends–and I do think that something similar will return to go with those lamb shanks when they happen later–when the temperature does not turn me into a total wimp!

…and yes, I’ve done that final taste–yum!  No chives though.

Leftovers? Possibly–it is a big dish of potatoes for three, but leftovers here are desirable.  Tomorrow they can become a roasted potato salad–perhaps with just a splash of balsamic vinegar, adding some fresh tomato, and cucumber, and, perhaps, some celery, radishes, crisp sweet onion or some freshly snipped chives.