Finally! A warm, sunny day when I can open up the hive and see what’s going on inside. The bees have been in their new home for a month now. The weather has, overall, been more like March than May lately so I’ve not been able to check inside the hive, and I’ve had to give them sugar syrup with Honey B Healthy  (that’s the bee version of a one-a-day vitamin) and feeding stimulant since they don’t forage in cloudy weather or chilly, rainy, or very windy weather.

These girls went into a completely new hive on 14 April 2017 so I was really anxious to see how they are settling in. There was no comb already drawn for them to start storing honey–lots of work for them to do before storing nectar and pollen. 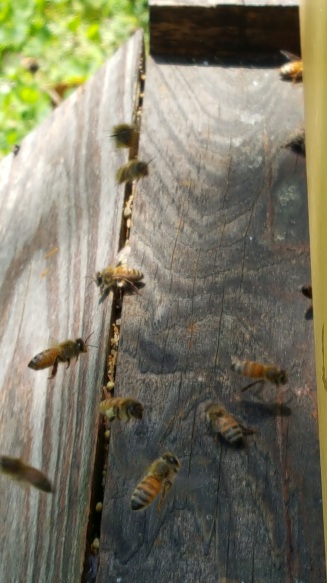 On inspection today I found that they have drawn (built) comb on almost all the frames (only one with no comb on either side, and another comb only on one side) in the brood box–so they have built comb on 6-1/2 frames of the eight so it looks like they are off to a good start. The queen has been doing her queenly stuff–there was lots of brood in the hive.

Since the weather forecast is looking much more like May for the next ten days, I didn’t replace the feeder after the inspection since there should be nectar available now that the weather has improved and they girls can go out to forage instead of staying home and slurping up sugar syrup. (When there is nectar available the bees don’t take sugar syrup even with the Honey B Healthy in it). They like the real stuff when they can get it.

About two hours after I finished the inspection I noticed that there was a lot of activity outside the hive: bees flying around the hive, but not going very away. I suspect I was seeing “new” foragers or field bees coming out for a first flight and getting oriented to hive location

When I finished the inspection–laid eyes on the queen–I added a medium super to give the girls room to start stashing honey and pollen. It looked as if the bees thought they were getting a bit crowded as they were putting pollen into some of the brood areas and building lots of burr comb. Now they don’t have to do that. I’ve given them more room for storing nectar and pollen.

First honey super of the season on the hive!