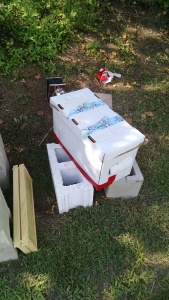 This might seem like a digression–but not really, since it eventually relates to honey, which is edible (so deemed appropriate by me, at least) though there won’t be even a single serving until next year.

Yesterday afternoon I went to Hillsborough NC and came home with a large box of bees:  brood in all stages, workers, queen, and even honey; all in a nucleus colony from Bailey Bee Supply.  The bees in that box had to be transferred into their permanent hive. I was a little uncertain about what their disposition might be after being carted around hither and thither–from apiary to supplier to home.  As you can see by comparing it to the cement blocks, it was a rather large box.  A buzzing box.  When I picked it up to take it out of the car I could feel vibrations. An adventure waiting for me when opening that box.

The bees from that box needed to be transferred to the hive body (below) that was to become their permanent home.  The nuc contained 5 frames–a miniature colony. Their permanent home will have 8 frames in each of the boxes.  Right now, only the one, but I

hope I’ll be adding another super and frames in a week.

Before opening this box of bees, who might just be a bit PO’d after all the travel, I got the smoker going, and then I donned the “typical” beekeepers jacket and the veil despite the heat.of the afternoon. The jacket pictured here is a special ventilated one–you can see through to tell color of clothing underneath.  Mine is NOT ventilated–it’s heavy cotton–and HOT. I didn’t put it on until I had the smoker going, and was right ready to take the lid off the box. Even the ventilated one like that would not have been much help because there really wasn’t any breeze.

By the time I picked up the first of the five frames to move it into the hive body, I was absolutely dripping sweat which plopped onto the veil in front of my face when I bent over to pick up a frame. I did even use a headband, too, but that didn’t stop the drips or sweat getting in my eyes. Drops of sweat clung onto the veil–not going right through, so I’m looking at a mass of moving bees with drops of sweat in front of my face. Now, being the truly quick learner here, I made a real effort NOT to bend over so far again. (At least I’d had the sense to put the nuc box on blocks rather than on the ground.)

I inspected each of the five frames–looking for the queen, and saw her on the last one, of course–at the bottom of one side of the frame.  I turned the frame to inspect the other side–probably not really necessary since I already spotted the queen–but I did it anyway and then put that last frame into the hive body, put the three additional empty frames in, picked up the box and tapped all the lingering bees down into one corner as much as possible, dumped them on top of the frames, put the hive-feeder on top and then the outside cover. Done! There were still some bees clinging in the box so I put it on the ground in front of the hive so those could climb up to the entrance. There were some bees buzzing around outside the hive, but all seemed good.

No problems, right? So I thought.

Being a bit like a new parent, first thing this morning before even first coffee, I went to take a look. What I saw, even from a distance and UN-coffee-d, evoked a fervent, emphatic (and unprintable) epithet!  Too many bees flying around and around the hive–not coming in and out, but flying around the hive. Dashing over to the hive, I found a fist-sized cluster of bees in the corner of the nuc box. That was NOT good–that’s when I realized that I must have dropped the queen when I rotated the frame (which fortunately I did over the box) rather than over the grass.  Too bad I didn’t do it over the hive–duh!  I guess that’s what you call a learning experience. I prefer that phrasing to either dumb, or stupid thing to do.

After taking off the cover and removing the feeder I did another dump of bees onto the top of the frames–queen still didn’t go in so I gently nudged her out of the box into the hive with my fingers–and closed the hive again.

Back for another look after about 30 minutes and all appeared much more normal–bees doing straight-line in and out, without all the flying around the hive.  Huge sigh of relief here, though the real relief will come only when I open the hive in a week  for an inspection and find things normal.

. . . .and I think this may to be a pretty friendly colony. I didn’t even think about getting out the smoker or putting on the jacket and veil. Here’s me in shorts and T-shirt opening the hive and popping the queen inside without all the paraphernalia. I had a few bees crawling on my hands and arms while nudged the queen out of the box, but not a single sting. Admittedly, I wasn’t pulling frames out of the body (in other words threatening their honey or brood).  I will wear a veil so that I don’t have bees crawling over my face, but I doubt I’ll put that heavy jacket on again.

So ends the first adventure of beekeeping.