This was, obviously written at Thanksgiving time! I was going to share it then but somehow it just didn’t get done. Better late than never because it is an easy way to do mashed potatoes for a group. 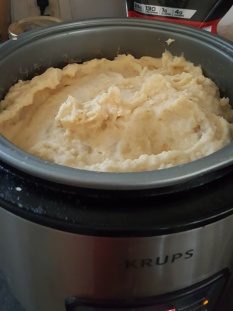 Since we all bring the side dishes, mine has gotten to be the mashed potatoes–with garlic. It’s not a new thing that I admit to being fond of cooking things the easy way (okay, so read lazy). This year I found a recipe from The Kitchn for making mashed potatoes in the slow cooker.

Since I needed mashed potatoes for nine people (who all seem to eats lots of mashed potatoes) I decided to try this as easier than my usual. I have to say that I’ve never seen the point in cooking potatoes in water when you want your mash to be really decadently rich with butter and cream. So that wasn’t new to me, but the slow-cooker part really intrigued me. I could keep the potatoes warm and take them to dinner in the slow-cooker–bypassing the necessity of reheating a huge batch of potatoes in the microwave.

So with my 8-pound bag of Russet/Idaho potatoes–where the recipe called for only 5 pounds, I started peeling potatoes–many potatoes. I’ve always wondered every time I decide to by “bakers” they are SO huge that it’s more than I want as a side to other food. I found the size potatoes I want for baking–yes, they were in that 8-pound bag, so there were lots, and lots of potatoes to peel. (Obviously when you’re trying to do single-serving cooking you don’t buy your potatoes in 5- or 8-pound bags.)  I peeled and stashed the potatoes in a large bowl of water until time came to cut them up.

According to the recipe the potatoes to be cut in 1-inch pieces, but looking at my 8 pounds of potatoes, the size of the slow-cooker, I decided that I’d cut them a bit smaller–1/2- to 3/4-inch. Good move on my part as even so a few didn’t fit and had to be left for cooking later. The recipe also said that you should cook the potatoes on high for four to five hours–or until very tender–since the Krups multi-function pot doesn’t “do” high in slow-cook mode it was to be until very tender. I added milk, half-and-half, lots of garlic cloves, some salt, closed the cooker, set the time to 9 hours and went to sleep.

While I was waiting for my espresso to brew next morning I opened the cooker, and found 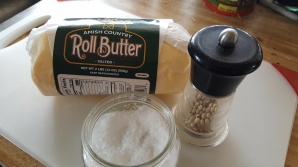 that my potatoes were not yet really tender. Closed lid, added a few more hours and had a very leisurely morning (as opposed to my usual T-day morning of peeling and cooking potatoes.)  Just about an hour before I was ready to go to dinner, I mashed the really tender potatoes, added the necessary butter, white pepper, and more cream (butter melted and cream warmed). Then with the cooker on “warm” the potatoes were ready to be carried off to dinner–plugged in once I arrived, and ready to serve. How easy is that!

Unfortunately, my Krups multi-function pot has a metal container with a nonstick coating, so I didn’t feel I could actually mash the potatoes in the cooker so I transferred them to a bowl to mash and season. If you did this in a cooker with a ceramic or crockery liner, you wouldn’t even have to use that extra bowl. The only additional dishes to clean would be the pan to melt the butter and warm the cream. Even using the extra bowl for mashing, these were the easiest mashed potatoes I’ve ever done. Very tasty too.

Instead of the usual supermarket butter (sweet cream) I used some Amish Country Roll butter that I found at my local Harris Teeter; only disadvantage was that it is salted, but since it was much  cheaper, I thought it was worth trying, but I’ll probably use unsalted next time. Besides, that butter comes in a two-pound roll. That’s a lot of butter for one person to use; portioning it and freezing works, but I don’t think the butter is good enough for that effort.