It’s been an absolutely lovely day here. Finally, the wind has died down–for the last few days, I was feeling as if I were back in California with the Santa Ana winds. Frankie, the cat, gets terribly fussy and whinges a lot when it is windy–and he’s done a lot of that the last few days (I do mean whinge–not whine). To the wind, add the spring deluge of pollen–the world is chartreuse as pollen settles on everything, everywhere, coming in through the smallest crack in the window, if you dare open the window. Obviously, not the best conditions to get my woodenware ready for the new package of bees to arrive.

Fortunately, today was lovely–a bit of breeze, not too humid, and just pleasant to be outdoors. So today, finally, I was able to get out the Watco Teak Oil and get my woodenware ready. I was beginning to feel really frustrated because my package (3 pounds) of bees and the queen are due next Friday and I really wanted to get that done so the hive boxes have time to sit and air out (even though I don’t do anything inside the boxes). Now I’m feeling good because I’ve gotten two hives and airing out. Tomorrow promises to be another lovely day for me to “conditioning” the rest of the woodenware for the season. 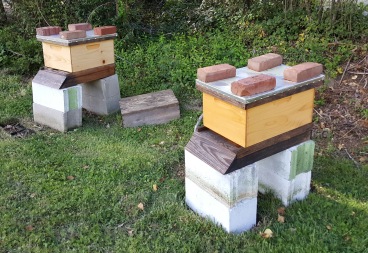 I’ve made one change for the coming season since I’ve now had bees for over a year, including one winter, and have had the experience of losing colonies added to that. I feel like I can begin to be opinionated, at least to a degree. I began with all eight-frame, medium boxes–for brood and for honey, and it had a colony overwinter in fine shape, did a split, and had two colonies as of last November–which didn’t make it.  So some experience. As I worked my hives over those months, I decided that I didn’t like the medium for the brood box, so this year, I’ve switched to eight-frame deep boxes for brood (instead of two medium boxes)–even though they will be heavier to lift. I’ll keep using medium boxes for honey supers.

Now, to wait anxiously until 14th April for my package of bees to arrive. That will really tell me that spring is here!