It’s been an absolutely lovely day here. Finally, the wind has died down–for the last few days, I was feeling as if I were back in California with the Santa Ana winds. Frankie, the cat, gets terribly fussy and whinges a lot when it is windy–and he’s done a lot of that the last few days (I do mean whinge–not whine). To the wind, add the spring deluge of pollen–the world is chartreuse as pollen settles on everything, everywhere, coming in through the smallest crack in the window, if you dare open the window. Obviously, not the best conditions to get my woodenware ready for the new package of bees to arrive.

Fortunately, today was lovely–a bit of breeze, not too humid, and just pleasant to be outdoors. So today, finally, I was able to get out the Watco Teak Oil and get my woodenware ready. I was beginning to feel really frustrated because my package (3 pounds) of bees and the queen are due next Friday and I really wanted to get that done so the hive boxes have time to sit and air out (even though I don’t do anything inside the boxes). Now I’m feeling good because I’ve gotten two hives and airing out. Tomorrow promises to be another lovely day for me to “conditioning” the rest of the woodenware for the season.

I’ve made one change for the coming season since I’ve now had bees for over a year, including one winter, and have had the experience of losing colonies added to that. I feel like I can begin to be opinionated, at least to a degree. I began with all eight-frame, medium boxes–for brood and for honey, and it had a colony overwinter in fine shape, did a split, and had two colonies as of last November–which didn’t make it.  So some experience. As I worked my hives over those months, I decided that I didn’t like the medium for the brood box, so this year, I’ve switched to eight-frame deep boxes for brood (instead of two medium boxes)–even though they will be heavier to lift. I’ll keep using medium boxes for honey supers.

Now, to wait anxiously until 14th April for my package of bees to arrive. That will really tell me that spring is here!

It has finally soaked into my brain that I keep babbling on about “boxes”, “supers”, and frames–without much explanation so I’ll try to remedy that.  The hives (that is the woodenware or structure) is made up of a number of structures stacked vertically in layers. If you look closely, you’ll see that the hive on the left  (which is Rosemarinus–how else would a cook name hives?) has five “layers” sitting on a wooden base. Salvia (on the right) has only three layers right now (a new one added just today).  The hives that you see here are Langstroth (after the inventor)–a very commonly used vertical hive. The hive is made up of several parts. Let’s start from the bottom and work up.

The wooden base with a sloped area (at the entrance) on the very bottom of the hive is a landing board to help the bees get into and out of the hive easily. It’s kind of a landing pad and place to taxi for takeoff.

Obviously, the hive needs a “floor” of some sort; on top of the landing board and frame we use a “bottom board”.  Clever terminology, huh?  In this hot climate for ventilation and to help control pests that like to hang around the hive, I use a screened bottom board–hardware cloth that is a small enough mesh that the bees cannot go through it. The white grid you see slides out so that the screen is open–it’s used to do maintenance things like mite counts when we need to assess for Varroa destructor infestation.

Now for the business parts of the hive. We build layers of “boxes” for various functions of the colony (that refers to the bees living in the hive). We add as many boxes as the colony needs to rear brood and to store honey so hives can be tall.  (The upper layer is just at shoulder height for me, filled with honey, so it weighs about 40 pounds.)

A box is just a wooden structure. We refer to them by different names depending on what the bees are using them for: brood boxes are where the queen lays eggs and the nurse bees rear new bees. Usually, the lower two or three boxes on the hive tower are used this way and we call those brood boxes or brood chambers. That huge open space is not very functional for bees to build tidy comb so we put in dividers: frames on which the bees build comb.

Here is a box filled with frames. Each frame is a wooden (or plastic) frame (like a picture frame without a picture in it). In order to help the bees be neat and tidy, we supply them with something to start building comb: a foundation–a base on which to build (draw) comb.  This can be a sheet of beeswax, or plastic (coated with beeswax). You see a frame with wax foundation tipped up at the back of the box.

Bees are constantly rearing new brood–in the summer when work is hard the lifespan of a bee is about six weeks. So the lowest three boxes on my hives are brood chambers. The frames there are filled with comb into which the queen deposits one egg is each cell. To keep the housework simple, honey and pollen needed for brood rearing are stored around the edges of each frame.

Above is a frame that I’ve pulled out of the brood chamber for inspection. (It’s actually being held upside down as I’m rotating it to look at both sides–so the bottom of the frame actually appears at the top of the photograph.) The darker, golden brown comb that you see (and the area under the cluster of bees) is where the queen has laid eggs, which turn into larvae, and then into pupae. The bees here are nurse bees–they are feeding the larvae. This is a pretty typical brood frame.  An area at the bottom of the frame in an arc contains the brood. Around the ends and the upper edge of the frame is stored honey and pollen used to maintain the colony. The cells containing honey are covered with wax–“capped”. 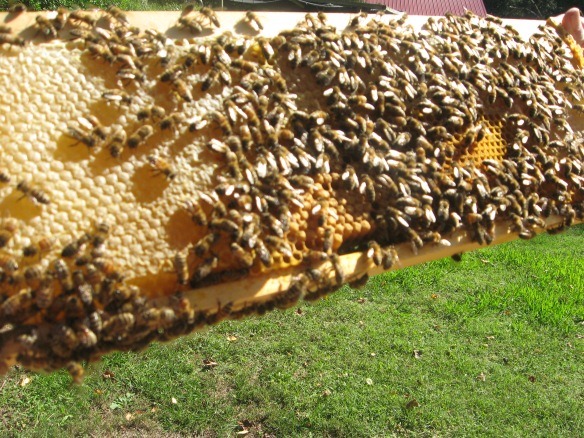 This frame is held right-way-up. You can see the brood area. Near the bottom center you see the golden brown cells that now have been covered with wax. These are what we beekeepers call “capped brood”–and contain maturing pupae–which will emerge from the cells to begin their working life. Again around the edge is capped honey. Now you have a general idea of the brood chambers. Hives will always have brood chambers. Now we come to another section of the hive–the honey storage part.

The term “super”–is the beekeeper way of saying that we have put boxes with frames above (over or superior to, thus “super”) over the brood chambers for the bees to use for honey storage–some of which we will take away for honey harvest.

The frame above is from the “super”–the box over the brood chamber where there is only honey storage–no brood rearing. The wax here is lighter in color since it hasn’t been used for brood rearing–this is the good edible stuff that can be used for comb honey, or have the honey extracted (by centrifugation) and the comb (wax) returned to the bees to fill again.

Many of the cells here have already been covered with wax–sealed for storage after dehydration so that it won’t ferment. At the bottom center, you can see some open cells–uncapped cells–that still need to have water evaporated from the nectar for it to become honey. Now you know about supers as well as brood chambers.

Now our bee house (hive) needs a ceiling and a roof. The ceiling is the inner cover.  It helps to control heat in the hive, and allows us to use feeders if needed during the cooler weather or when not many thing are blooming or to get through the winter. (Yes–we do sometimes need to feed our bees.)

Finally, we come to the “roof”–which in bee lingo is a “telescoping cover” or “outer cover”. We call it “telescoping” because it can slide forward or backward to allow ventilation through the hive in hot weather or to allow a top entrance for bees to enter and exit the hive. This is a basic, no frills, functional hive roof–what you see on my hives.

As beekeepers we need to “inspect” the colony. That means that we look inside the hive to see if all is going well: the queen is laying eggs, to make sure that there is not some nasty disease in the colony, to see how much pollen and honey is stored.

For an inspection we disassemble the hive into its parts and we pull at least some of the frames and look at both sides of them–to see if the honey is capped, and if the larvae look healthy, et cetera.

You start the inspection by removing the telescoping cover and the inner cover–after using some smoke to let the girls know that you are going to invade their home.

Here is my hive with the “roof” removed–and looking down on the “ceiling” or inner cover. You can see that you start encountering the welcoming committee right away. Once you remove the inner cover (below) you can see the frames in the boxes–and the girls going about their business. They’re going to be walking and flying around all the time you are inspecting the colony, but they don’t sting unless you injure them. (They die when they sting, so it’s a last resort for them.) But they are curious, and will explore so a veil is a necessity during an inspection. 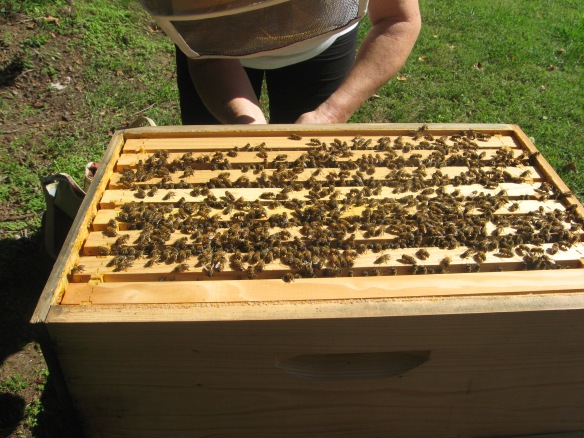 Now when you look at first photograph, I hope you can find the parts of the hive at bit better. Rosemarinus (on the left) has three brood chambers and two supers. If it’s a very productive season, I may need to add one or two more supers. One of the supers on Rosemarinus is for comb honey so can remove it when the girls have filled it and give them an empty one to go to work on.

Salvia (on the right) has only brood chambers right now. I’ll be keeping a close watch on it to see when they need to have a super put on so there’s plenty of place for them to stash the sweet stuff–some for them for the winter, and some for me.