My Instant Pot (IP) is now a kitchen fixture (as was my multicooker before)–it has a special spot on the counter since it is in almost daily use. The more I use it the better I like it.   It’s a great addition to the kitchen and has replaced several other small appliances; however, that does not mean I’m ready to give up the dutch oven for some slow cooking in the oven on winter days.  That kind of braise is not something that I expect the IP to replicate.

I’m working on a list of credible recipe sources for it.   By credible, I mean those that seem to be aware of what this appliance can really do, without unrealistic expectations.  Some books that I’ve looked at seem to suggest that the IP can replace any other way of cooking, so I’d not judge them to be useful recipe sources.

My inbox popped up useful information from a favorite source (Kitchn): a whole gallery of different things that are kind of IP basics   like rice, steel-cut oats (important breakfast stuff here), cooking dried beans (one of the main reasons for getting the IP), stock-making (pressure and slow cooker), and not-so-basic: risotto, braised cabbage, plus a lot more. This gallery includes the slow-cooker function of the IP (which seems to be somewhat ignored in many books and online groups).

Cookbooks by authors that I’ve found useful while adapting to the way the Instant Pot works include:

There are a couple others coming out in 2019 that I’m looking forward to taking a look at: 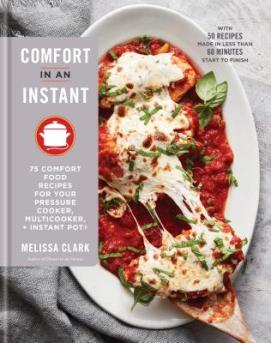 I admit that I’ve succumbed and now have an Instant Pot (IP).  I’m pleased with everything I’ve done in it so far, but I think I’m cognizant of what its capabilities are so I’m not going to ask it to do things that just aren’t realistic. I don’t expect the same results from a braise done in the Instant Pot as I would from a braise done in my Le Creuset enamel cast iron dutch oven over hours in the conventional oven, and to be perfectly frank, I’ll not quit doing braising in that conventional oven even though the results from the IP can be very good but definitely not the same.

I’ve been looking at cookbooks oriented to cooking with the instant pot–and I find that a lot of them need a healthy dollop of skepticism about what the IP should–not can–do. The IP is, after all, a kitchen tool. There is no such thing as one-tool-does-it-all. My expectations of the IP are based on what I know about the cooking environment inside that appliance–just as were my expectations of what my Krups multifunction cooker would do.

The article from Taste titled “Don’t Cook With an Instant Pot Just Because You Can”  (a discussion of Melissa Clark’s IP cookbook titled “Dinner in an Instant“) has that healthy bit of skepticism–no one tool does it all. The book confines itself to recipes which the IP does really well making it a good addition to the library if you are learning about an IP–it will help with a realistic expectation about what this kitchen tool does really well.

I guess my point in this ramble is that the IP is an expensive kitchen gadget and you don’t want to be disappointed and relegate it to a dusty corner somewhere to be with the “fry baby” that also never gets used. So far I think it is well worth the price so long as I have realistic expectations of what it does well.

I know that it’s not going to put out anything crispy or crunchy, and I haven’t really figured out why I’d want to use it to cook fish. I do like steaming some vegetables in it, and I love the way hard-cooked eggs peel when cooked in it. Rice was fine too, although I did mine with the pot-in-pot technique which is wonderful for cooking for one–so far a very happy addition to the kitchen!