This is a first for me–I’ve eaten reheated fish. I have been known to re-purpose leftover fish–e.g. salmon into a Scandinavian potato salad, or grilled tuna steak into tuna salad; reheated leftover fish invariably (after one bite or even just a sniff) goes into the garbage.

One of the attractions of sous vide cooking for me as a single-serving cook has been the references to how well foods cooked this way can be stored (right in the cooking bag) for longer times.

My test of this was the monkfish that I cooked sous vide a few days ago: the fillet cut in half, cooked separately in two quart-sized Ziploc bags with only a little salt and some olive oil. One serving was eaten immediately. The second serving was cooled quickly and refrigerated (unopened) in the cooking bag for eating later. (Circumstances prevented me from reheating this for several days, but the monkfish remained sealed in the cooking bag until i reheated it in the water bath, to the cooking temperature.)

Results? OK, so this wasn’t a blind taste test, but I just ate every bit of that second fillet and I doubt that I could tell it from the fresh-cooked portion–it may well be the first time I’ve eaten reheated, cook fish. (That would be an interesting test.)

Although a cliche, this may be a life-changing event for me–at least in terms of cooking for one. I might not be limited to cooking things that are more usual leftovers,or limiting myself to small portions of fish that I’m going to eat at one time. Most of the references that I’ve found to keeping sous-vide cooked dishes indicate that the storage time if unopened–just cooled and store in the cooking bag–is much longer than the usual use-by times for cooked stuff. The lentils that I cooked in the mason jars kept very well–as indicated for up to ten (yes, 10) days sealed in the cooking jar (after being cooled and refrigerated). A real boon for when I’ve a busy schedule–hands–off cooking, the ability to have extra meals in the fridge, minimizing waste, and (especially) getting things cooked just the way I like them because of the temperature control. A son gôut!

Obviously the decision (and selection process) of a sous vide circulation heater necessitated a good deal of research before, and perusal of cookbooks after it arrived in the kitchen.

The ChefSteps website for the selected device (the Joule) is bristling with information including recipes. I’m sure that had I chosen a different device (e.g. Anova) I would have found the same resources.

But if you have a new way of cooking you must also have a new cookbook. Thanks to my Kindle and a subscription to Kindle unlimited I was able to sample a lot of different cookbooks. I’ve found several for specialized uses of sous vide that have gone on my wish list, but the one that I bought was Sous Vide for Everybody. I like all the sciencey explanations of why recipes work. There was a delightful “freebie” with the book: recommendation to check out a particular website. Lifehacker site has a delightful collection of articles on what and how to use sous vide cooking.

As useful as the recipes from ChefSteps are, I’m in favor of having independently tested recipes. For my first “cook” I did short ribs and I did find it interesting that the temperature recommendations from that book were a bit different from the website, although overlapping. Given the results of my first batch, I do want to try the temperature recommended in that cookbook.

For right now that’s my source for recipes as I explore sous vide; however there are books from several authors that have gone onto my Kindle wish list: Jason Logsdon (several sous vide books), Dave Arnold (for Liquid Intelligence), Lisa Q Fetterman (Sous Vide at Home). Some of these for basics, others for special applications of this precision cooking technique. So much exploration to do!

Sous vide is a bit of a misnomer. It means “under vacuum”. That was how it originally started but now it would really be more appropriate to call it something like precision cooking now.

Vacuum was first used as a way to remove air from around the food so that there was good contact with the water in the bath since air is a poor conductor. Now while it’s possible to use vacuum a lot of sous vide cooking is done using Ziploc freezer bags and removing air by letting water in the bath press the plastic onto the food. You can also do this kind of cooking in–you guessed it–mason or Ball jars although you’ll need to increase times just a bit since glass is a poorer conductor of heat than with the think plastic.

Note that I specifically used the Ziploc brand name. Those are recommended as being safe and holding up to the cooking temperatures and times used. Most recipes suggest gallon bags, and not ones with the slider. You want the double seal. Since I’m mostly cooking single-serving size amounts I’ve been using quart size, and a smaller water bath than is usually recommended.

Some of you might be cringing at the temperatures and the times you see. They are safe. Even the lower temperatures essentially pasteurize the food according to USDA standards. More on that later, but pasteurization is really a pretty fascinating process.

I’ve already cooked one thing in a mason jar–lentils. Cooking right in the jar makes one of the good things about sous vide even better especially in cooking for one: that jar of lentils (about 3 really hefty servings) could go in the fridge so there was no extra washing up. Awesome. I’m envisioning some other advantages to sous vide for doing single-serving cooking!

Supper this evening was Chilean sea bass (Patagonian toothfish. or Dissostichus eleginoides if you prefer). I’ve been skulking through cookbooks again–especially those that have sous vide recipes. (No, I haven’t bought anything special for sous vide cooking–yet, though I will confess to looking at immersion circulators and thinking a birthday present to self.)

In The Food Lab: Better Home Cooking Through Science by J. Kenji López-Alt I foud a lot of recipes for sous vide cooking–and a method of doing it without any special equipment (at least for foods requiring only a short cooking time). It’s done with a beer cooler.  I do have a beer cooler so this seems like a method to try, as an alternative to the multifunction pot that I used before because I was too lazy to try the beer cooler method.

First I decided to check out the beer cooler to see how well it held temperature. I put about 2-1/2 gallons of hot tap water into it (118ºF) and checked the temperature over several hours.  Two hours later, the water temperature was 113ºF, and at four hours, 110ºF. I decided that would certainly do for “short” cooking times. Seems most fish recipes call for cooking times under one hour.

The recommended temperature that I found for Chilean sea bass ranged from 122ºF to 140ºF so I decided to go with 130ºF. Since my sea bass was frozen (individually packaged filets from Costco), I thawed it in cold water, seasoned it lightly with salt and black pepper, a tiny splash of fennel fused olive oil (olives and fennel are crushed together), popped it into a zipper-lock freezer bag, and after squeezing out the air, plopped it into my beer cooler for 45 minutes. (Water temperature was 131ºF when I put the fish into the water and 129ºF one hour later.)

Results? Well, satisfactory. Obviously, the temperature in the cooler held well for the necessary time. The sea bass wasn’t quite as done as I’d prefer–though perfectly evenly cooked (even though this piece had one end that was definitely thinner than the rest). I think for my next–there’s more in the freezer–I’ll go with the 134ºF temperature or maybe just a tad higher.

I’ve also read lots of warnings about over-seasoning for sous vide cooking (and I came close to over-seasoning with the monkfish) this was bordering on under-seasoned. Next time, a bigger pinch of salt, and a bit more fennel oil, and a little lemon zest.

Andrea is passing close to us and the rain is the kind that makes you want to have quality time with the cat and a good book–so glad to be indoors.  But, my unpreparedness did make me venture out (cat litter very low–very serious problem!); fortunately, out and back before the heavy rain started. 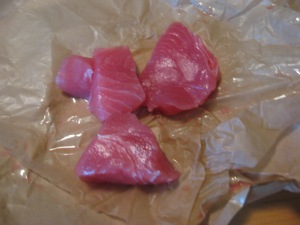 I came home with an impromptu purchase–the local HT had lovely looking tuna (wild caught) on sale.  I’m going to make a small batch of tuna confit to use with my summer salads, though I suspect that one of the small “steaks” is going to supplement the grilled or griddled shrimp for supper.

I’m really intrigued by the sous vide cooking technique–and I’m constantly drooling over recipes from Stefan’s Gourmet Blog!  Such perfectly cooked meat, and the veggies, too. But, as Stefan points out, it takes equipment!  I’d love to try tuna like that as it seems that fish do well that way.

For now,  I  will settle for the very slow “poaching” as an alternative.  It certainly beats the average canned tuna (unless you can get one of the canned variety that is hand packed, and cooked only once.

I keep wondering if there are any low-budget ways of trying the sous vide  technique! I think some research is called for here.