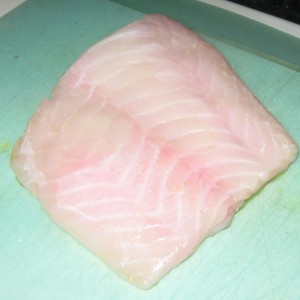 I went to Harris Teeter (affectionately known as the Teeter or HT) this morning looking for something to cook for  dinner (or supper if you prefer).  I was scoping out the fish contemplating salmon, tuna, or one of the standbys when  saw something that I was not familiar with, but look great.  The sign said it was  King klip.  My cooking curiosity being what it is, I had to bring some home with me, particularly as it  was inexpensive.

The fishmonger told me it was sort of like grouper and would do well grilled.  The heat being what it was this afternoon (my thermometer in the shade said 97 ° F ), I thought that grilling was out of the question so I opted for the cast-iron griddle –my standby.

another portion to try cooking a different way tomorrow), patted it dry, and rubbed itwith a tiny bit of olive oil.   Then I started wondering what I was going to have with this lovely fish…looking around the kitchen I saw the kaboka squash that I’d brought home from the Compare market the other day and decided that was going to be part of dinner tonight.  (I now have to figure out what to do with the rest of this thing as well, since I used only about a quarter of it.)  I attacked it with my chef’s knife, halved it, seeded half, and then took off several slices to use this evening.

I decided that I needed some green stuff with this as well, so I make a trip to a neighbor’s garden(yes, she had previously offered)  for some of  the last of the snow peas–it’s really the last–the heat has gotten to them for sure.

I decided that I’d steam sauté the squash, extravagantly with a bit of butter since the rest of the meal would be “lean”.  I used a paring knife to remove the skin and cut it into chunks so it would cook fairly quickly.

I topped and tailed my snow peas and since they were feeling the heat I put them into some cold water until I was ready to cook them.  I started the  squash in my small sauté pan with a bit of butter and about a

tablespoon of water, covered tightly.  It was time to heat up the griddle.  Once it was hot, I rubbed just a light coat of oil onto the surface and put my filet on to start cooking.

Meanwhile, a quick check on the squash–not quite ready to let the water evaporate yet, but close.  Back to the fish–not quite ready to turn yet–still resisted my sliding the spatula under the edge, so it needed a bit more browning to “release” by itself.   It was smelling really good by now.  About the time it was ready to turn, the squash should be read to be uncovered to finish cooking while the water evaporated, and then to start sautéing to finish.

The fish released and turned easily on the griddle.  I removed the lid from the squash and let the water evaporate from the pan; turned the heat down to hold while the fish was finishing.  I could see the opaque line moving toward the middle.

I put the snow peas into the pan on top of the squash and put the lid back on so that they would get just a bit of steaming .  By the time this thick filet was opaque to the center, the squash and peas were ready to eat as well.

I warmed my plate under hot water and dried it, and put my dinner on it!  Simple, and really pretty healthy–I did

put just a small pat of butter on top of the fish to finish it off with the lemon.  That was about 30 to 40 minutes start to finish.  Since this was my first time with this fish, I wanted to cook it as simply as possible to get to know its basic taste.  It was a very mild fish, but it held together well during the grilling.  It’s going in my “standby” category with tilapia for a good all-purpose white fish.  (It’s line-caught, by the way; I was pleased to see that HT signs indicated how all of the fish in the case had been caught)!   It was a simple, but good, quick, healthy meal!

I think that I’ll try baking the other half of that filet in foil with some veggies.  As for the rest of that kaboka, I have a neighbor  who I’m sure will be able to make use of at least part of the other half.  (If you’re doing single-serving cooking, it’s always good to find out what your neighbors like to eat–so you can share when you get really big things like winter squash or watermelons.)  I’ll share, and still have a bit more of the squash for me.  The second portion of fish will probably be a hobo pack with some fresh tomatoes and herbs–maybe tarragon. The rest of the kaboka squash is likely going to get a “classic” treatment:  baked with some butter and brown sugar.

One of the good principles of single-serving cooking is to share the big stuff.  Most of my single (or cooking for two) neighbors always seem really please to be able to get a portion of something like the kaboka–especially if you give cooking instructions if it’s unfamiliar to them.)