It’s another grey day–unseasonably warm, but at least not hot, sticky, and terribly humid today–the kind of day when you need to smell something cooking–long, slow, and tantalizing.   I found lamb shoulder chops on special (2-1/2-pound package) at the grocery store, I decided to try the lamb/garbanzo slow-cooker thing in the oven since it’s not too hot (and I’ll use the oven to prepare a second dish for reheating tomorrow (acorn squash stuffed with Sicilian sausage).

The slow cooker version of this concoction was really good, but I thought it could be improved by doing it in the oven. Even after reading the Cook’s Illustrated Slow Cooker Revolution (volume 1), I am still not a wild fan of the slow-cooker.  I use it because it does some things well, and is necessary at times to fit cooking into a working schedule.  The Slow Cooker Revolution has improved my slow-cooker results immensely, mostly because I’ve discovered some unusual ingredients that can improve flavor.

My impression was that many of these recipes required more preparation time than I would be able to put into a slow cooker recipe, given that I use it for utter simplicity.  I’m interested in seeing what comes from volume 2 of the Slow Cooker Revolution.  If I have to do a lot of preparation for the recipe, then I might as well not use the slow cooker.  I still find that I like over-braising when possible; however, I do find I’m using the slow cooker even more since I read the first volume of this book. That said, I still prefer oven braising, especially if I’m working at home.

I had intended to do this in the Romertopf, (one of my favorite things for roasting and baking hearty, peasant-style comfort food in the winter) but by the time I had boned the lamb and added other ingredients, it wouldn’t fit in either of my small ones (great for single-serving cooking), and was not enough to fit in my large Romertopf (for roasting whole chicken, for example)–so it was the Dutch oven for today.

(Shoulder chops are reasonably priced, and the boning doesn’t take long if you use a boning knife rather than trying to do it with a paring knife or chef’s knife.  Those bone went into a saucepan with a tad of salt and some bay leaves to make stock.  After boning out, I had about 2 pounds of lamb, so that’s what I started with.)

In order to be as much like the slow-cooker, I did not brown the meat or cook the onions separately–just combined everything, covered, and put in a preheated, 300-degree Fahrenheit oven.  I added 1 cup of water to start, and checked in one hour but there was plenty of liquid.

On tasting, I found it needed more than the 2 tablespoons of chili powder so I added about 1 tablespoon more, stirred, covered, and let it continue to cook. There was plenty of liquid, so next time, I’ll not add any water–just rely on the juice from the tomatoes, onions, and meat.

The stock made with the bones smelled really good–if more liquid had been needed during baking, I would use some of the stock.  There was some meat from the bones in the stock, but I not enough to spend time picking off, although I’m not compulsive about trying to get every bit off when I bone meat like these chops. Since I started the stock in cold water, the meat that was left was pretty flavorless, but the stock was good.

There will be a next time for this–and unless I’m really pushed for time, or can’t leave the oven while I’m out, I’ll opt for the oven method to cook this–a much more complex flavor with the same ingredients, likely attributable to the bit of evaporation that takes place in the oven but not in the closed slow-cooker.

In trying to research this issue, I’ve perused many different sources–and the gas/slow cooker comparison is difficult, and I get the feeling that the answer to which is more efficient is an “it depends” situation.

Interestingly, an article on slow cookers versus electric ovens from the University of Connecticut Sustainable Living suggests that there may not be a significant difference in energy use.  SFGate discusses gas versus electric energy use, which gets more complicated, but I’m not sure that there difference is significant enough to make me give up oven braising, even though I’d like to minimize my “carbon footprint” as much as possible. If my slow cooker requires eight or so hours of cooking, and my oven braise requires only two or three hours on low to medium heat, then it may be a toss-up, since the slow cooker doesn’t cycle, and the oven (gas or electric) does.

Oven braising in the wintertime helps warm the house so probably cuts my heating use some, but I’m certainly NOT going to oven braise in the summer and increase the use of air-conditioning.  There is lots of conflicting information out there on the ‘net.  The “best” I found was from the Consumer Energy Center (California Energy Commission)–from that information, I’m not going to give up oven braising for the slow cooker anytime soon, but I’ll still use the slow cooker for some things.

I’ve recently started playing with a pressure cooker–it’s a lot different than what my mother used. The recipes in Pressure Cooker Perfection have been a good starting point. I suspect that I’ll be using a pressure cooker more  in the future, as well as the slow-cooker. Climate, air conditioning, and heating, are all things that will enter into my decisions. I’m also trying out an portable induction unit which is supposed to be ore energy efficient.

So many options for energy efficiency–but what about taste?  I doubt that any other method is going to come out tasting like an oven braise, no matter how many umami-enhancing ingredients you add. 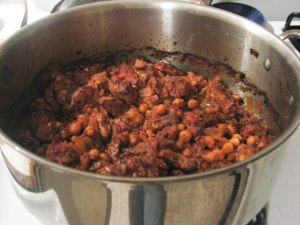