I’m an omnivore–and that definitely includes meat in judicious amounts. Lamb shoulder chops get frequent use in my kitchen since they are readily available, relatively inexpensive, and tasty. Lamb chops or a rack appear seldom, unfortunately, since they are expensive; braised shank will appear occasionally, but leg of lamb almost never–unless I’ve organized my self to invite lamb-loving friends to share.  Even a half leg is just not in the single-serving category, so much as I like it, I don’t get it very often.

On a recent quick stop at the grocery store, I found a lamb leg steak! Fortuitous since I just happen to have made a batch of  ratatouille (slow-cooker testing of a recipe) and somehow those two thing are appealing together.  That lovely steak is going to be cooked indoors since it’s grey outside with spatterings of rain off and on–comforting sound on the metal roofing, suggesting a lazy day. 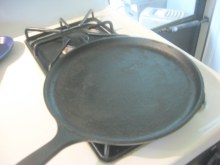 The omnipresent cast-iron griddle is my instrument of choice for cooking steaks or chops indoors. For steaks or chops that are up to an inch in thickness–or perhaps just a tad more–I like to cook them with the method described by Jamie Oliver for pork neck steak.

This 1-inch steak weighs in at just under a pound, so there will be leftovers, but as with beef steaks this isn’t a problem–easy to find uses for the leftovers before they spend enough time in the refrigerator to taste like something that has been in the refrigerator. Though this steak could be cooked right out of the package without any preparation, I’m going to give it just a bit of pretreatment.

Cook’s Illustrated (and America’s Test Kitchen) have repeatedly demonstrated that brining or salting improve texture and taste of meats. Salting has the advantage of not requiring planning–and it’s easier.  The usual procedure is to sprinkle with

kosher salt and allow to stand at room temperature for an hour. I’ve found that salting and allowing to stand in the refrigerator overnight works well–I can prep my chop or steak immediately on bringing it into to the kitchen and it will be ready for later. The suggested amount of salt is 3/4 teaspoon for each 8 ounces of weight.

(This doesn’t call for a measuring device at all;  two good three-fingered pinches, sprinkled from way above so that it spreads out evenly.  When you see chefs sprinkling something from shoulder height, that’s not showmanship. Sprinkled from that height, the salt crystals have a chance to spread out and not just plop on the steak in one spot.)

Notes:  I prefer a griddle (or griddle pan), not a grill pan that has the ridges on it. The griddle will give you browning all over the surface of the meat, not just stripes on it. Stripes are pretty, but all-over sear really tastes better to me.

Ever since I discovered this technique of cooking 1-inch chops or steaks, it’s all I’ve used for meats. For thicker steaks, I’ll use a combination of pan-searing and oven. I’m sure there’s a good food-science explanation for why this works so well, but I haven’t gone looking for it–I suspect that the heat transfer to the interior of the steak or chop is different than cooking one side at a time, as well as the extremely high heat.

True, the stove will need cleaning after you’ve done this, but the result is well worth it. There is no “overcooked” grey area to this steak. This works well with pork, veal, beef, and the lamb.

. . . don’t forget to put the battery back in the smoke alarm! 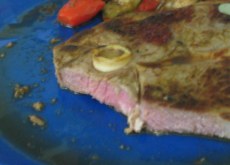 I’ve mentioned pan-searing as a cooking technique for indoor steaks, or really anything that you want to have a nice brown crust on that is NOT really thick. Well, pan roasting is half a pan-sear, and then finish in the oven.  As this terminology suggests it involves doing part of the cooking on the stove-top (the searing) and part in the oven–the dry heat roasting part.  It’s a  technique that can be applied to many things: proteins–meat, poultry, fish, and vegetables. One of the advantages is that finishing the cooking in the oven is gentle and even.

The general technique for pan roasting proteins is simple:

Here are some video links to demonstrate pan roasting of various proteins.  It’s a great technique.

If you’re skulking through cookbooks and blogs, you sometimes hear “pan-roasting” applied to vegetables.  Often these are more like steam/sauté  rather than this method used for protein.  Probably we should refer to the method for cooking protein as pans-sear/oven-roast.

Steak is not something that I order when I splurge for a meal in a fine restaurant; it’s too easy to do at home and good for single-serving cooking since it’s portioned when it comes home, and it’s easy to cook.

A good thick-cut, home-cooked steak is one of the things that I don’t mind having left over, since it’s usable as “roast beef” for a yummy sandwich.  (No, the roast beef from the deli simply does not do it.) My favorite way to cook the steak is from Cook’s Illustrated, 01 May 2007–it does take a little time and minimal effort, but it’s well worth it.

My usual choice of steak is a strip, or New York strip, cut 1-1/2 to 1-3/4 inches thick, with fat cap intact.  If I don’t find one lolling about   in the butcher case (you won’t likely find this in the pre-packaged section)  ask to have it cut the way you want it; my local Harris Teeter will cut to order but generally has thick-cut steaks in the butcher case.

This works fine with rib eye or with filet mignon, as long as it is thick-cut. Personally, I prefer strip or rib-eye to filet. Even with rib eye, it’s still not a substitute for real prime rib roast, but a good “second” so that I plan to have “leftovers”.

Add some simple sides like salad or baked potato. Now pour yourself a another glass of that luscious  red wine that was  breathing while you were cooking, and enjoy.