The snow happened, and melted quite rapidly but with the temperature only reaching into the mid 40s, it’s still a good day for beef and barley stew. Just from browning the meat and the vegetables (including the garlic, tomato paste, and the Vegemite), it already smells like comfort food. I did opt to be lazy and finish cooking the stew in the oven (275ºF).

Now I’ve experienced the jar of Vegemite (Marmite wasn’t available at my local supermarket) although I’ve not gotten to the point of trying it spread on toast. I like the aroma from the jar–but that really didn’t come as any surprise because I already knew I liked the aroma of yeast-y thing: certain champagnes, bread dough…. 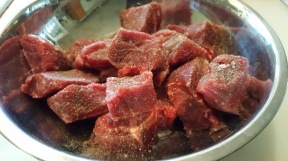 The prep for this is really easy–most of the time spent browning the meat and vegetables but the hands-on work is still minimal, especially since I bought boneless short ribs, so chunking them up was quick and easy. To my dismay, I did find that I hadn’t any whole canned tomatoes–only diced, so diced was what I used.  I did “cheat” and use frozen chopped onions (probably my favorite “convenience” thing except for mirepoix (homemade and put in the freezer), and the kale will be from a bag as well. For now,  it’s time to wait, and anticipate! 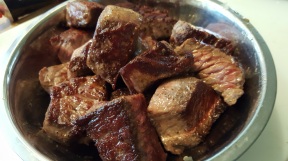 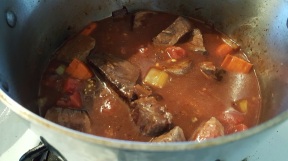 Since I’m cooking this for only one person–and this half recipe should be two quite generous servings, I’m going to add the kale (frozen) to only what I’m going to eat today. Whether I decide to freeze half or simply reheat in a couple days, I’ll add the kale to that serving then so it not overcooked. That’s one of the advantages of frozen stuff when it comes to cooking for one.

…and finally, it’s time to eat! This is the first time for tomatoes in beef and barley stew, but I like it as an alternative to the more stripped down version that I usually do (read beef and barley with seasonings)–but I think I’ll try adapting mine by adding the extra umami sources and the kale but omitting the tomatoes. Beef and barley stew, for me, is a bit like lentil soup: you can never have too many variations.

I’ve not used short ribs often for stews, but in cooking for one when I don’t want to volume that I’d get with chuck, I think I’ll me using them more often–even though they are not really cheap, the have the advantage of being available in quantities suitable for single-serving, or two-serving, cooking.  Another adaptation that I’ll make is to increase the proportion of barley (and, obviously, the liquid) in my efforts to shift toward using less meat.

I suspect it would taste really good even without the Vegemite, but that jar of yeasty stuff is going to hang out with the fish sauce, anchovies, and soy sauce because it certainly is tasty with it.

This was a yummy meal for a chilly day!

I love my chilli con carne–but it’s very a very time-consuming kitchen project so after considering umami in the slow cooker I though I’d try a few shortcuts, with some umami boosts.

I usually buy a big chuck roast and cut it up myself, but I found that my local Harris Teeter had stew mean which was chuck roast already cut up, so I bought a big package of that.  Some time saved there.  I did have to cut the pork, but I bought  spare ribs so that all I had to do was cut them into chunks–another bit of time saved.

One thing that takes a lot of time is browning that much meat, so I thought I try bypassing that step since I still plan to cook it in the conventional oven very slooooowly, letting evaporation and concentration happen so there should get a little browning as the liquid reduces.

I toasted all the spices (cumin and coriander) and the chilli peppers that went into the pot and added a little tomato paste that had been browned.  I know that fish sauce (nam pla) and soy sauce are supposed to boost umami, but I just couldn’t put either of them into the pot.  If this doesn’t work, I guess I’ll try that next time.

The pot of chilli con carne is ready to go into the oven as soon as the oat bread comes out.  So some hours from how, I’ll know if this worked or not….

Obviously I’ve not been giving a lot of thought to cooking  things lately–it’s been end-of-term grading, indexing and proofreading, or getting  ready for the farmers’ market, or actually being at the farmers’ market, with more energy going to planting things, both for later harvest and for selling at the market than into cooking.

One of the down sides of working the farmers’ market is that I’m one of those people who wake up like a compact fluorescent bulb–pretty dim at first–so getting to the farmers’ market on time on Saturdays involves getting up before the birds just to give me time to be awake and functional. Even Fridays demand early rising, especially as the weather gets hotter–flowers to cut early in the morning and produce to be harvested before the heat of the day sets in and thing wilt…and just to avoid being out in the worst of the heat.

I’m getting into the swing of that now but it still takes time for my lights to come on, though less painful now.  That early rising on Friday and Saturday makes me into a really lazy slob on Sunday.  Now that the Spring term is over, I’m not meeting classes during the week so I’m enjoying the summer hiatus from lecturing, but still working at freelance indexing so the absolute laziness has to be confined to Sundays and Mondays through Thursdays are still busy.

All this means that for Friday, Saturday, and Sunday cooking is likely to be focused on one-dish meals, and dishes that are good (or even better) when reheated.  Sometimes Saturday meal is not even something reheated–it’s my treat-yourself day–OnlyBurger for after-market meal before I devote the rest of the day to quality time with the cat!  (This past Saturday the treat was a Texan (burger with braised brisket on it) and a peach ice cream sandwich (handmade at OnlyBurger) after the market.  The evening meal was Carolina Moon cheese and strawberries–both from the farmers’ market.)

This weekend schedule means that I try to do some planning and cooking on Thursday to have reheatable food on Friday and Sunday.

This weekend’s meals are going to feature an absolutely lovely cross-cut beef shank from Meadow Lane Farms (also from the Durham farmers’ market)  in an easy dish that can cook mostly unattended: osso bucco, but with beef shank rather than veal shank. (The osso bucco really just means “bone with a hole” or marrow bone.)

It’s a dish that’s easily adapted for one person–there’s nothing fussy about it–no need to be exact or tedious in measuring ingredients, and to make even more “unattended”, it will go into the slow cooker (also serving as rice cooker and steamer) while I’m out working on the farm. 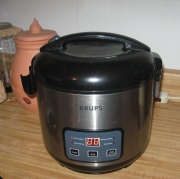 I have to admit that I’ve not been a fan of the slow cooker until recently, at least for anything much more than cooking dried beans, or poaching a beef tongue. The flavors and textures just aren’t the same as when the slow cooking was done in the oven where some evaporation, browning and concentration takes place even in a covered dutch oven.

My attitude about slow cookers has changed since I found the Cook’s Illustrated Slow Cooker Revolution (See Bibliography) and learned some techniques for making food out of the slow cooker more flavorful.  I’m not ready to quit slow-cooking in the oven despite that, but in hot weather I’ll certainly use the slow cooker more often with some of the “tricks” I learned from that cookbook.

What I missed most in slow-cooker dishes was that savoriness that comes from browning (Maillard reaction)  when you slow-cook in a traditional oven or brown/sear on the stove-top.  In the slow  cooker, you can make this absence less noticeable by adding ingredients that contribute “umami“.

Some of the most useful things I learned from that Slow Cooker Revolution are ways to use the microwave oven to facilitate the slow cooker, and using some “unusual” ingredients  in recipes–not esoteric ingredients, just pantry staples that boost  the umami flavor:

These are all easy to do–they really don’t add significant extra prep time or effort, and do really make a difference in the flavor.  I expect an easy, flavorful meal (or two) from the braised beef shank that is going to emerge from my slow cooker on Friday evening, thanks to some added umami!